(NOTE: THIS POST WAS RELEASED EARLY THIS WEEK ON OUR PATREON. IT’S $10/MONTH.)

I heard Kendrick Lamar say “Keep playin’, man” in the song We Cry Together — a great song for a couple’s first dance at their wedding, by the way — and I had a vision. I heard “Keep playin’, man” and I saw Nick Senzel. He was “playin’.” Out on the field and just “playin’.” What a world. From top prospect in 2018, with the label “future All-Star as soon as 2019.” Just absolutely overcoming all odds, from losing a blonde dame in Golden Gate Park that gave him Vertigo to talking like Jimmy Stewart that drove his friends and family crazy to googling “Nick Senzel injuries” and having Google say, “C’mon, man, you need to be more specific.” 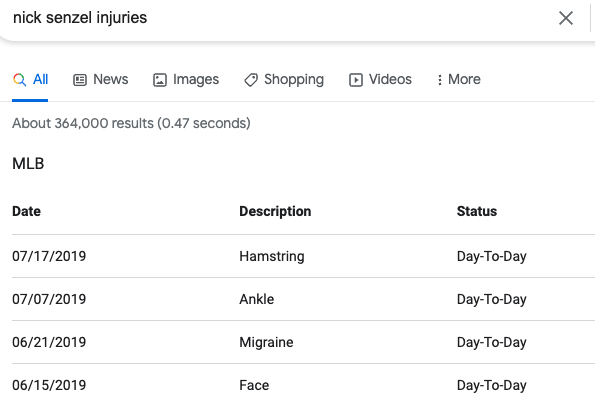 Seriously, look at that. 364,000 results in 0.47 seconds is Nick Senzel’s injury history to a tee. In just the first four rows listed there, he had four different injuries in one month in 2019. I’d laugh if I wasn’t worried it would somehow cause a butterfly to flap its wings into Senzel’s oblique and injure him. With all that said, Nick Senzel was the top option on the 7-day Player Rater rostered in under 25% of leagues, so here’s to him finally making it all come together and “keep playin’, man” for at least another week. Anyway, here’s some more players to Buy or Sell this week in fantasy baseball:

Cal Raleigh – Sounds like a guy who went to NC State who was from California. “Dudes, why you harshing my buzz and calling me, Cal Raleigh?” That’s Cal Raleigh.

Eric Haase – Had Haase earlier this year in one league, which sucked. But he’s hitting now, so now’s the time you should haas Haase.

Juan Yepez – Been hot, and his name is also the answer for how many Kanye dispensers they have on eBay.

Darick Hall – Here’s what I said the other day, “(Darick Hall was a) 16th round pick in the 2016 draft who mashes. About time the Phils put hitting for power and nothing else first over defense and approach! The Phils fell asleep watching Edwin Encarnacion career highlights, and decided to make a whole team of E5’s. What are Darick Hall’s initials? DH? Yes, that’s about it, and just for NL-Only for now.” And that’s me quoting me!

Cavan Biggio – *wavy lines* Craig Biggio throws a 5-year-old Cavan a piece of Silly Putty right into his ribs. The toddler falls off, crying. Craig yells, “That’s why you have elbow pads!” *wavy lines* This might be why Cavan doesn’t wanna wait too long for his pitch.

Seth Brown – Figure Brown gets up with no one on, and the pitchers are just throwing him whatever at least once every few games for him to hit it out, i.e., it’s bad pitch o’clock, yeah, it’s Seth thirty.

Alfonso Rivas – He’s hitting ninth, so you can do the Carlton dance grabbing him if you need some Alfonso RBIs’eiro.

Vidal Brujan – Apropos of nothing, starting to get the feeling Brujan is going to be a 2023 sleeper.

Isaac Paredes – Did you notice any difference this week with the Buy column? I leaned heavier on the 7-day Player Rater roster percentages than ESPN. The big difference is our roster percentages are way higher, because our fantasy baseballers (<–my mom’s term!) are better and quicker picking up guys. Paredes, for unstints, is at 90% (when I wrote this) in RCLs, and at ESPN he was at 22%.

Diego Castillo – Was supposed to lose his starting job, instead he starting actually hitting and it was glorious for the one league where I have him rostered, as I watched myself get sonavabenched by him game after game.

Tony Kemp – I wonder if he ever gets mail from one of Shawn Kemp’s 24 kids, like, “You don’t know me Tony, but I know you.” I’d bet someone five imaginary dollars that Tony’s received at least one of those accidentally. What’s not an accident (like a guy on a tech company campus, I am running some segues today!), Kemp’s been hitting a bit recently.

Gio Urshela – Not only can you grab him because he’s been hitting, but you can also change your team name to Urshela is My-Shela.

Nick Allen – Saw that Allen was hot recently over the last seven days, and then I saw his actual stats and, well, pregnant pause, um, uh, moving on!

Miguel Rojas – Had a brain fart and thought Rojas was younger than he actually is. He’s 33! When did that happen? Thank God for cheap teams, the Marlins gave this absolute bozo close to 900 games and $10 million. Not even sure if he would’ve made some other teams out of spring training for the last ten years. Can you imagine the Red Sox, Yankees, Dodgers, or a host of other teams ever starting this schmohawk? Any hoo! He’s been hot.

Evan Longoria – Since Longoria does so little all year, I don’t get much opportunity to mention how wild it is what a miserably awful player he became after leaving Tampa. He’s been hitting a little bit recently, but, by and large, he’s just awful. I don’t subscribe to the Rays’ newsletter that they always make great trades, but even though they got nothing back for Longoria, getting rid of him for a crate of unjarred mayonnaise would’ve been preferable.

Abraham Toro – Maybe because I wrote a sleeper post for Toro this offseason, I keep expecting big things still. Turned out Toro was a sleeper like Ferdinand. Grey working in cutesy references!

Tyrone Taylor – As I said when Renfroe went down, Taylor would get a boost in value, and he has. And that’s me paraphrasing me!

Kole Calhoun – Is it me (it’s not me) or does it seem like one week a month Kole Calhoun gets hot, and by the time it comes around to picking him up, he is no longer hot? It’s why we should never trust redheads. They are possessed by Satan.

Rafael Ortega – Fun fact! The word raffle comes from a Venezuelan man named Rafael who used to sell tickets to try to win a Casio keyboard.

Jake Meyers – Nearly made him the lede Buy this week, but I couldn’t pull the trigger on my excitement. He has speed, power, decent hit tool, and…Well, I’m getting excited again, but not quite enough in shallower leagues. I could see a 15-team mixed league pickup, but need to see something before he’s 12 team mixed worthy.

Kyle Isbel – While we all want Olivares, we might be better off wanting Isbel.

David Peterson – This is a Streamonator call like the call it makes to Best Buy.

Jose Urquidy – This is also a Streamonator call. “Do you have any appliances there that look like they could use a friend?”

A.J. Minter – Fun fact! Minter is the female version to parents telling their boy, “Use Listerine, mister!” Also, with Kenley out, Will Smith is lurking, like it’s an Oscars’ stage and someone made an alopecia crack.

Seranthony Dominguez – That the Phils haven’t thought about teaming Seranthony with a minor league prospect named Joedee Foyster is just not thinking about all the fantastic tie-ins they can do. “Hey, Gloria, the guy is asking if you want your human brains wit’ Whiz.” That’s a Phillie fan in line for the new cheesesteak at The Bank.

Tanner Scott – It burns me up like falling asleep in the tanning bed of Orange Is The New Black Tanning Salon in Orange, New Jersey that I drafted and/or picked up every other Marlins’ reliever and Tanner Scott is the guy that will lead the club with saves.

Jhoan Duran – Might have actually finally adverbially moved in front of Pagan for saves in Minny-soda. Even if he didn’t, much like Clay Holmes before him, he’s been worth rostering either way. Since Pagan’s been so bad, I wonder if Griffin Jax gets some 9th inning lox, uh, looks.

Eli Morgan – If you would’ve told me in the preseason Eli Morgan was someone I’d want, I’d say, “Yeah, for my taxes, right?” Then Eli Morgan put up numbers that are eye-poppingly gorgeous from middle relief, and now all I can think is, “Anyone know how to use Turbo Tax?”

Joe Musgrove – I’ve teased it out long enough. I’ve rubbed your shoulders, and you thought, “Well, that is quite pleasant,” but what you didn’t know is I was tenderizing you so I could cook your ass with my Joe Musgrove sell. It’s the oldest trick in the book, “How To Serve A Fantasy Baseballer (With A Sell.)” There was even a teasing of the brain-modules when I gave you a Youtube Sell about Joe Musgrove, told through the mouth of Queen Elizabeth as she tramped her way through the English countryside. People enjoying Musgrove this year clearly have forgotten why he was so draftable later. It’s because he didn’t have a good 2nd half last year, and totally flamed out in September. That was the case in 2019 too (though it was August that year). August and September in 2018? Yup, same story. Maybe he can avoid the drop-off this year, but you’re betting against the house. I wouldn’t trade him away for a bag of Lay’s Cappuccino Potato Chips but I would go to our Fantasy Baseball Trade Analyzer and explore options.