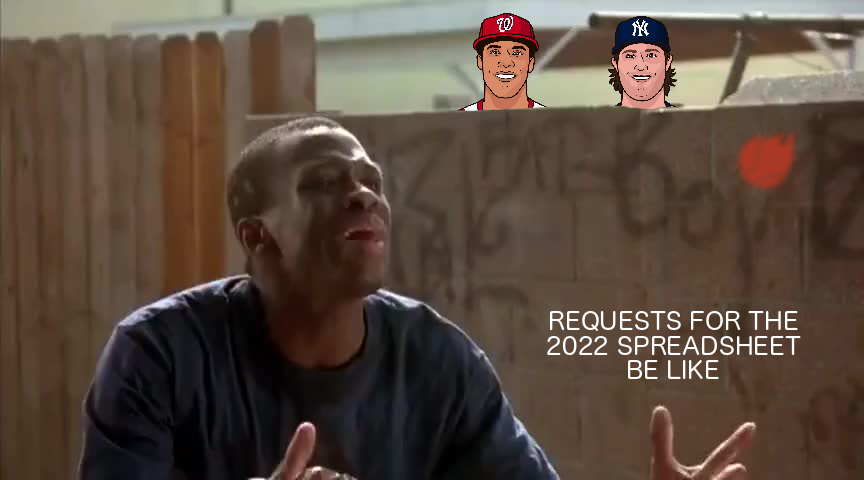 Check this out, man. I got these burgers, man. They some double cheeseburgers. This post is going to be short, but sweet. You asked for the spreadsheet and I have delivered. Here are some of the requests and comments I have received over the last two weeks. I mean how could I refuse?

“Appreciate everything you do, Im going to be lost without your draft sheet…”

“PLEASE DO THE SPREADSHEET! Ill venmo you” (not holding my breath on this one)

“Love the spreadsheet and use it every year. It’s actually what brought me back to Razzball again and again.”

“The spreadsheet does so much for so many. Bring it back!”

“Plz plz! I rejoin twitter every year at this time to check on malamoney’s point sheet status updates”

You can only imagine what Basehead from Menace II Society offered me!

Juan Soto is the top player in points leagues this year. Juan Soto. That sounds like the name of the Spanish version of Han Solo if it was translated by a person with a speech impediment. No offense to anyone with a speech impediment. According to Larry David you can actually use the handicapped stall in the bathroom. I’m sorry, I mean stall for people with disabilities. Either way, even though Soto rhymes with Roto, Soto is number Juan in points leagues. He is your 1.1 pick, so please don’t ask me who to pick with the first pick.

Gerrit Cole is the top ranked pitcher. No surprise there. Despite what the spreadsheet says, I’m probably not taking him unless he falls to me in the second half of the first round.

Here are some hitters that the spreadsheet seems to think can be draft day bargains.

I’ll let you figure out the rest as you play with my sheet.

If you don’t remember how to use it, or this is your first sheet, here are some links to my posts from previous seasons. With all the time it took to make this spreadsheet, I have little desire to try and paraphrase what I’ve said in years past.

This post is based on a head-to-head points league with a scoring system as follows:

When asking questions, please include your league’s scoring system as I can’t accurately answer the non-obvious questions without it.

If you want to manually update the projections for a player, you can do that on the tabs labeled “Projections – Hitters” and/or “Projections – Pitchers“. After doing so, you will need to re-sort the “Rankings” tab by either the “Rank” or “FVARz” column to see the updated rankings in order.

If you end up with a nonfunctioning spreadsheet, instead of asking me how to fix it, just download it again and start over. Thanks. Tread lightly.

And don’t be stingy. Spread the spreadsheet. Tweet. Re-Tweet. Whatever. Let’s go viral.