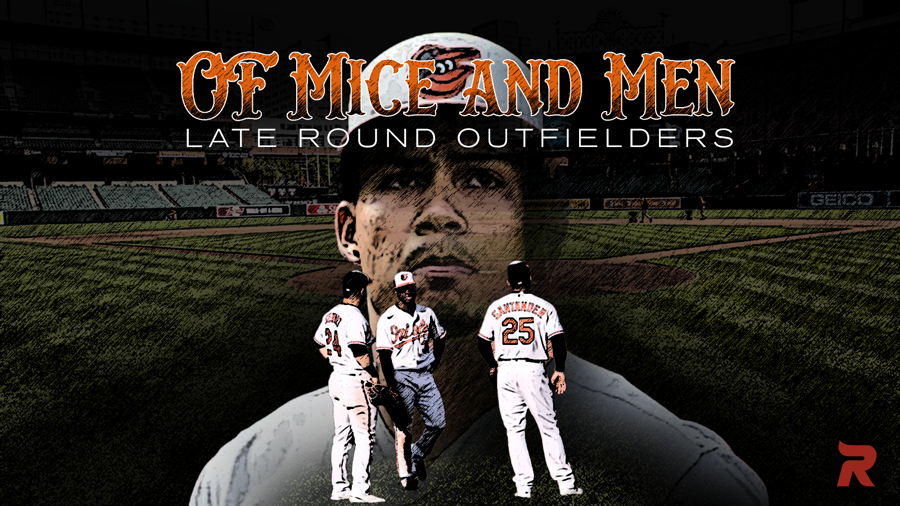 Do you find yourself at the end of drafts digging for OF5 gold? Well, look no further, as a precursor to my OF rankings I have for you a few deep pick options for that final OF slot on your 12-team and 15-team leagues to wet your whistle. With the rise of bullpen games, openers, and piggy-back starters, you don’t want to wait super late to fill out your core of 4 to 5 starting pitchers. In fact, I’d make it my goal to have 5 starters by pick 250ish to ensure you get enough “built-in” innings, and then at end of the draft take a few shots at lottery tickets. But this is not a pitcher drafting puff piece! Today we will look at the gap between those 5 starters and the lottery tickets at the end, the space for finishing out your OF with hitters that might amount to something but are also those first targets for being churned out for breakouts and hot hands. As depressing as that sounds, best-laid plans are best not withheld! LFG

Santander will likely be hitting in the middle of the Orioles’ lineup this year, so volume and opportunity will definitely be in his favor. As a switch-hitter with more pull power on the left side, the Camden Cavern changes in left field will have less of an impact on him compared to teammates like Ryan Mountcastle. After a bit of a breakout year in 2019 in which he hit 20 HR in 93 games paired with a .261 AVG, Anthony Santander followed that up with 11 HR in the shortened 2020 season. So why is he so far under the radar?

Last year he managed 18 HR in 110 games, with 12 of those coming after the All-Star Break. And despite hitting .226 in the first half, some optimism blooms as it rebounded back to a more familiar .258 line. So what was holding him back early on? Aside from an uncharacteristically low .237 BABIP vs RHP, Santander corrected his approach elevated the ball nearly 10 percent more for a 48.3% flyball rate. Back in line with his previous norm. Need some late-draft pop with RBI opportunity? Santander might be just what you need.

Breakout star of the 2020 season, Kyle Lewis is not that far removed from his 11/5/.268 sprint season. Troubled by several injuries last year he only played 36 games, but we still saw that the improvements in his plate discipline were not a fluke. After his first taste of MLB in 2019, he has improved his K-rate each season from 38.7% in his cup of coffee to 29.3%, and then last year down to 25.2%. Last year in the limited action he also maintained a walk rate above 10%. How sticky is that? We don’t know for sure; but, through 112 big-league games he’s held an 11.4% walk rate.

Despite the swing and miss, the patience to get on base should continue to balance out his approach. The Mariners adding more depth to the lineup like Winker gives this offense more life and him more opportunity to avoid the spotlight (possibly more fastballs to hit while pitchers focus on the bigger names around him). His AVG floor could be near .230 but his batted ball profile and below-average BABIP last year leads me to believe that a .250 average is certainly reachable provided he can stay healthy for it to normalize and a 20/5 season with upside could be in the mix.

This was a good idea even before the fire sale, but an even better one now. With Winker shipped out and Castellanos already not returning, Tyler Naquin’s playing time is all but a lock now in the top half of the Reds’ lineup. Last year in just 127 games he put together a 19/5/.270 season with a respectable 7.7% walk rate. He did that often from the leadoff spot or in the 3-hole. Depending on how many other trades CIN conducts by opening day he could be batting anywhere from 1-5 in the lineup this year.  Either way, Naquin’s ADP is soon to be on the rise.

When you look under the hood, everything seems to checkout minus the AVG. A 10.4% barrel rate is encouraging, check. His 41.6% Hard hit rate is not stellar but serviceable, check. And his 19.4% HR/FB rate looks mostly sustainable in that ballpark. The one hiccup is his 45%+ GB rate last year which leads me to believe his xBA .262 could be the reality of his 2022 season should he continue his worm-killing ways. The big improvement though was cutting his K-rate by 5% in the second half which could lead to solid production again.

Next time I’ll post my top 100 OFs for the 2022 season, these guys included. There’s a vast array of mediocre outfielders to go over as the cream of the crop is rather thin but once you get to the middle they all start the look the same when you squint. This is the chance to gain draft advantage and address other areas of team needs and circle back for your OF4 and OF5. This year I plan to break down the ranks into team construction tiers to help you plan when to fill those spots. See ya next week!

If you want more Coolwhip to top off your baseball experience, fantasy or otherwise, you can follow me on Twitter: @CoolwhipRB.