Welcome back to Razzball Hitter Profiles for the 2022 Fantasy Baseball season.  We will be rattling through interesting names every Saturday as we roll up to the regular season.  We are not talking the top hitters, because you really do not need me to tell you that Juan Soto can hit, or that Trea Turner can run.  You need that like Nelson Cruz needs to play the outfield.  Just because it can be done, does not mean it helps!

For this week, we are digging into players that finished out strong last season.  These guys were running so hard, it was like they could not wait for 2021 to end and 2022 to begin.  If that was our measure, then we could invest in half of the world’s population.  However, we here at the higher establishment that is Razzball like to use numbers, trends, awkward graphics and the occasional useless banter to evaluate the next big thing.  Without further rambling, let us dig in!

Here are three players, that finished the season strong that represent good buys as we turn towards 2022:

Paul ‘Goldy’ Goldschmidt has had a slow fall from the fantasy elite as the desirable combo of power, speed and batting average started to falter through the 2019 and 2020 seasons.  In the first half of 2021, the profile seemed to continue a reflection of an aging star.  However, when the calendar hit July Goldy heated up like the summer weather.  From July on, he delivered 20 long balls, 7 steals and a .334 average to go along with solid counting states in a strong Cardinals lineup.

That second half appears to be driven by trading grounders for liners, an increase in pull percentage and a bit of timely luck.  More solid contact and a more aggressive approach are almost always helpful for the bottom line.  With an ADP in the fifth round and rolling off the board as the fourth first basemen, the price is actually on the border of an over correction early in the draft season.  Steeper climbs during the spring will push him beyond investment, but for a multi-category threat he is worth grabbing if he does not gain any more helium in the spring.

Mountcastle certainly had his ups and downs during the 2021 season.  However, looking at the last two months of the season he delivered a .262 average, 16 dingers and 32 runs and 32 RBI.  Over that time, he had a top 25 slugging percentage and top 20 barrel percentage while experiencing a drop in the BABIP department.  Are there concerns?  Sure, he struggled a bit to round things out in September when that luck was against him.  He also was playing the most games of his career and appeared to have been wearing down.

With a guy like Mountcastle, we must look beyond the numbers and recognize that he played quite well as a rookie and appeared to make true adjustments along the way during the 2021 season.  He also has the walls moving in at Camden which should give him a few extra dingers this season.  Finally, the Orioles just might start to be relevant from an offensive standpoint with some lineup protection in Cedric Mullins, Trey Mancini, Austin Hays and the up-and-coming Adley Rustchman.  Going just after pick 100 in early drafts, there is some profit room remaining.

Brandon Lowe is on the shortlist of guys I am most excited about going into the 2022 spring session.  Looking back to early 2021, I was notably low on Lowe.  Looking at a profile with high strikeout rates and middling exit velocities spoke to a risky hitter that would produce power, but at the risk of destroying your batting average.  Halfway through 2021, the jury was out on if we were trending toward Gallo territory or a well-rounded youngster.  In the first half, Lowe powered 21 homers over the fence and delivered nearly 100 R+RBI.  Looking forward into the second half of the season, those lines remained remarkably similar with one big exception, he hit .291 instead of .209.  For a guy being drafted with the likes of Tommy Edman and Jazz Chisholm, this is quite intriguing.

So, what happened to move from a 3-category masher to a 4-category star overnight?  Brandon Lowe changed his approach at the plate dramatically.  His strikeout rate dropped 10 points from over 32% to just over 21%.  He also dropped his walk rate slightly from 12% to 11%, but that was even further exaggerated in the last month of the season at 7%.  Normally a dropping walk rate is concerning, but Lowe is an exception for one reason.  His walk rate dropped because he increased his aggressiveness with pitches in the zone (Z-Swing %) while barely changing his swing rate at strikes outside the zone.  Essentially, he was swinging more often at better pitches.  This is a good thing for a guy with Lowe’s power profile.  If these changes hold and there is little reason to think they will not, the sky is the limit for Brandon Lowe in 2022. 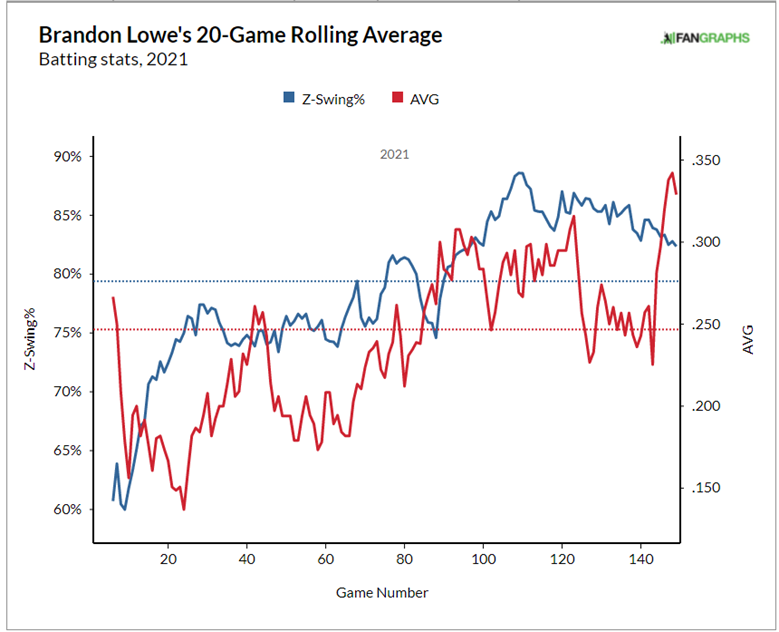 These are just three strong finishers that I like in 2022 at their current ADP.  We certainly could have an honorable mention for guys like Frank Schwindel, Austin Hays, Bryan Reynolds or several other second half surgers.  Come back next week to look at the opposite end of the spectrum as we dig into some bats to approach with caution based on their close to the 2021 season.