Not sure if I’ve said this recently. Oh, I’ve said this before, absolutely. But recently? Maybe, maybe not. What is…recently? The last ten minutes, ten months, ten years? What is *pauses for dramatic effect* time? What I’ve definitely said before, but maybe not recently is there’s many different types of fantasy baseball sleepers. There’s guys who are sleepers in 12-team leagues; 15-team leagues; NL or AL-Only leagues and 50-round draft and hold sleepers. Not all sleepers are built the same. Also, what we expect from them is different. An AL-Only sleeper might be projected for 4.25 ERA and 8-ish K/9. A 12-team league sleeper better have an outside chance for a top 20 starter year. Also, an AL-Only league sleeper might not be worthwhile in shallower leagues, but a 12-team league sleeper is worthwhile in all leagues. Those 12-team sleeper guys are also guys who I just want to talk about because they’re gonna be so good. Think of the 12-team sleeper guys as the Kevin Gausmans (Gausmen?) from last year. These guys are good with a chance for being elite and should be drafted a round or four earlier than they’re going. Dylan Cease is in that camp. He won’t be a sleeper in most deeper leagues, but he will be a factor in all leagues. So, what can we expect from Dylan Cease for 2022 fantasy baseball and what makes him a sleeper?

Do you think Dylan from 90210 was named for Bob Dylan and all the young Dylans are now named for Dylan McKay? Something to ponder, perhaps. Okay, so Dylan Cease had a top 7% strikeout rate of 31.9%, and the 2nd best K/9 in the league at 12.28. With a strikeout rate that impressive, he could make a 4+ BB/9 work. He had a 3.7 BB/9. Not exactly tight-pantsed Robbie Ray, but not loose-fitting drawers Ray either. (Uh, that’s saying he’s not 2021 Ray but also not 2020 Ray, either. You get what I’m saying, don’t make me come inside a parenthetical and explain shizz.) Cease needs to lower his walks to take that final step forward. So, what’s the chances of that happening? Good. For 2022, I’ll give Dylan Cease projections–Jay-kaying, I’ll explain more.

Last year, Dylan Cease had hitters swinging outside of the strike zone at a 32.5% rate, which was 26th in the league, up from 26.4% the year before, which was way below average. His new rate was near Scherzer, Buehler and other aces. What’s fascinating (depending on your definition of fascinating) is Cease had the 14th lowest swings generated in the zone, around Stroman and Gerrit Cole. So, that means Cease is generating swings outside the zone (bad results for hitters) and confusing hitters so much they’re not swinging at actual strikes (more bad results). That’s bad-bad for hitters but good-good for him. To me, that makes what he was doing last year repeatable. He had the 7th best xBA for starters. That isn’t accidental. Feast your peepers on this: 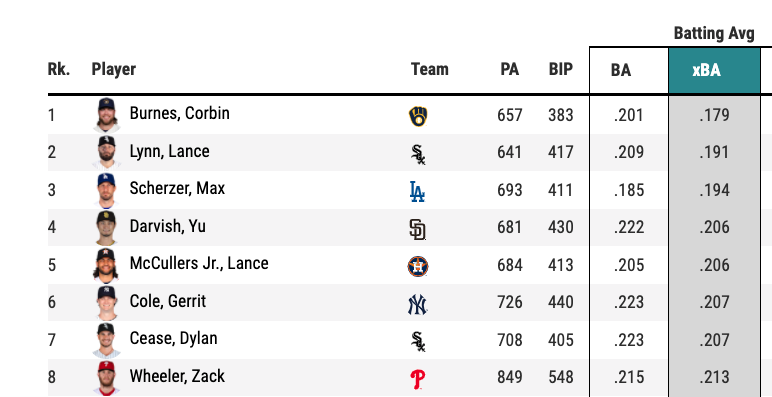 No one on that list is smoke and/or mirrors. Dylan Cease was bolstered by the 7th best slider in the league, that he threw the fifth most times. If you got good stuff, you give give give give give give it a go go go go go go. The bad news that will become good news is his fastball was a negative. He threw his slider 906 times and it generated a .147 xBA, which is honestly hilarious. Look at his slider numbers. Oh, yeah, no one is above him on this list, because he’s number one:

Hitters could’ve known the slider was coming and it wouldn’t have mattered. Dylan Cease’s 4-seamer, how’sever, was a .272 xBA with 13 homers allowed in 1383 instances. How is this good? Thanks for asking, Mr. Awkward Segue Question! His fastball last year at .272 xBA was much better than the year before (.306 xBA) in every metric (23% Whiff rate vs. 17.2; .361 xOBA vs. .391, etc.), and is 97 MPH, which is 7th best in the league. There’s absolutely a case to be made that fast doesn’t equal great, but you’re telling me a guy who’s throwing 97 MPH on his fastball, that is getting better year-over-year, can’t figure out how to make that a modicum better to pair with his top ten slider? Carpe diem, it’s time for Dylan to Cease the day. For 2022, I’ll give Dylan Cease projections of 15-6/3.58/1.12/241 in 184 IP with a chance for a lot more. Those names — Gerrit Cole, Zack Wheeler, Max Scherzer, Corbin Burnes and others — above? Next year at this time, it won’t seem out of place when mentioning Dylan Cease in that class.